Dexter’s Half Dozen: The Ostheim Trilogy

This special bumper length one-shot issue celebrates Dexter’s Half Dozen tenth anniversary with a trio of stories about the Ostheim vampires. It’s a stand-alone issue with work from 2010, 2011 and 2014 collected for the first time (with the 2011 and 2014 stories being previously unpublished).

The issue is split into three parts: How to Kill a Vampire was originally released in 2010 as a convention exclusive ashcan, and was the team’s first attempt at a traditional vampire story.

In 2011 they created Bride of Ostheim as a follow up but never found a good moment in the comics’ continuity to introduce it.

Then, in 2014, around the time that Dexter’s Half Dozen was nominated for a Stan Lee True Believer’s award, the third story was created and recently finished off to complete the trilogy.

In total, this is 36 pages of second world war supernatural mayhem.

Be the first to review “Dexter’s Half Dozen: The Ostheim Trilogy” Cancel reply 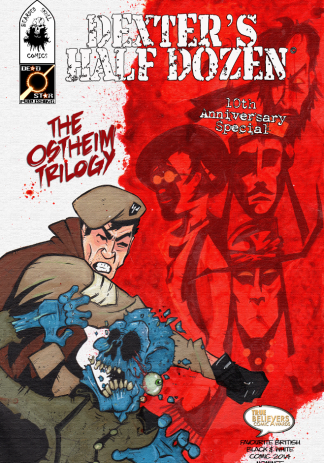