Last year we released a four issue mini series called 7 Shades. Created by David Clifford and Peter Rogers, it’s the opening salvo in a supernatural western epic. The plot focuses around the story of Sammael Hicks, drunkard and ne’er do well living in the fictional town of 7 Shades. The Awesome Comics Podcast called it “a wonderfully sort of dark take on the western genre” and we’d agree with that but we’re only just getting started.

In the first arc, David and Peter set up the central conflict that will run throughout the series: Samm becomes Sheriff of the town and must somehow face off against his six evil outlaw half-brothers and bring them to justice. 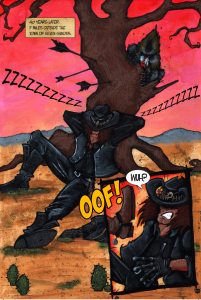 The premise behind the town was established, key characters have been introduced, and some of the supernatural elements were hinted at – including a demonic pact – but to avoid overcomplicating things at such an early stage the story has stayed fairly contained thus far.

We wanted to give the series a strong start so the first two issues were released at the Cardiff Independent Comics Expo while the final two issues of the first arc debuted at Thought Bubble and ICE Birmingham respectively. In each case we were able to get Peter and David there to meet the public and really show off the strength of the story. If you missed out on that, you can try out issue 1 or grab the entire first arc in a bundle!

The plan is to keep publishing 7 Shades until we reach the endgame. David and Peter have briefed us on the general direction the story will take (and it’s an exciting one) but they’re playing their cards close to their chest on the exact details. To find out what happens you’ll have to buy the issues and find out! Unlike Dexter’s Half Dozen (also illustrated by David), we won’t be releasing 7 Shades as a sequential series though. Instead, we’ll work in a manner similar to Tank Girl where we’ll complete an arc and then release the whole mini series over the space of a few months. That means that you, the reader, will be able to read whole arcs more quickly.

To make that possible there will be a special one-shot released between each miniseries. That brings us to…

David has recently delivered the pencils for this 48 page one-shot. Each one of these will look at side characters and better explore the town and its secrets. In Hell’s Belles, we shine a spotlight on the proprietor and ladies working at 7 Shades’ infamous brothel. These are not your typical damsels in distress and each one has a story to tell.

We want to be careful about exactly what we say – but the book has an Assault on Precinct 13 vibe to it, and it will examine who each of the Belles are, and how they came to 7 Shades.

7 Shades: Hell’s Belles will be released later this year and the next miniseries is on track for a 2020 release.