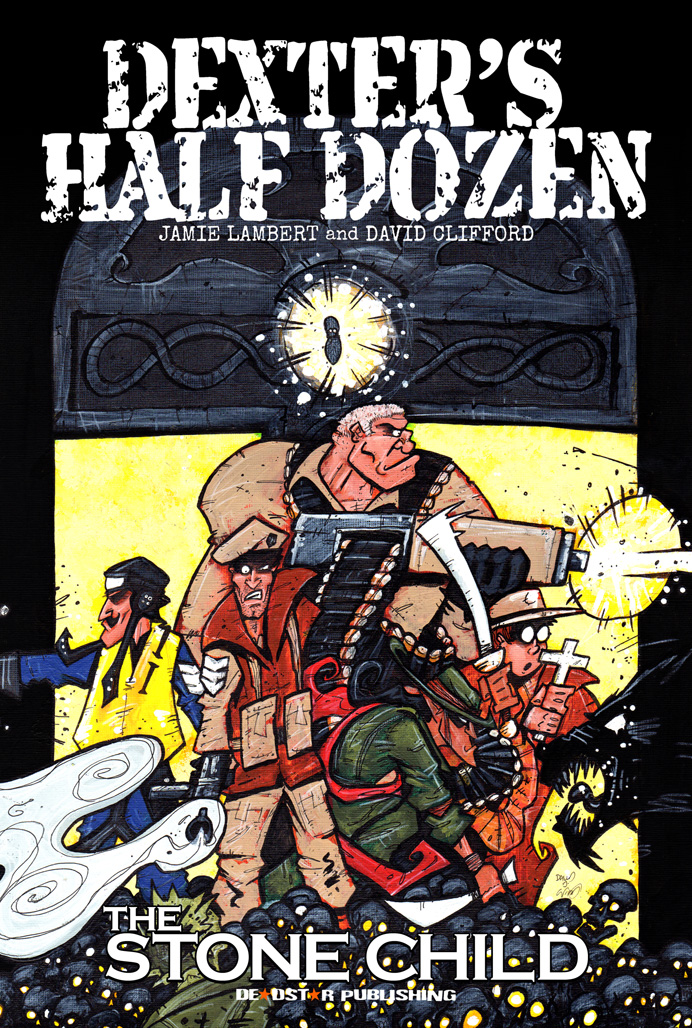 In 2008, a full two years before Deadstar Publishing was founded, two creators plucked up the courage to start putting out their own comic that was half-way between the A Team and Hellboy. That comic was Dexter’s Half Dozen – and the first storyline released was that of The Stone Child. 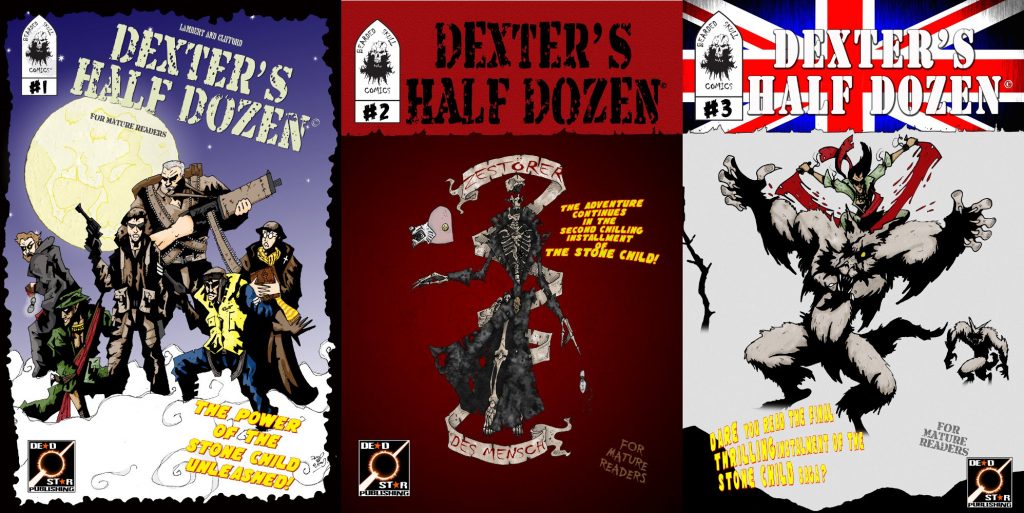 Fast forward to now, David Clifford and Jamie Lambert have completed ten issues – nine in main continuity and a bumper length one shot tenth-anniversary special. The next issue is underway and we’ll give you more information about that one when it comes closer to release.

Ever since we started publishing Dexter’s Half Dozen we’ve wanted to offer The Stone Child as a combined edition but life has a funny way of interfering with plans. Just about everything that could go wrong has gone wrong – we blew up a computer, Jamie and David blew up a computer, somehow all the original art files became corrupted… for a while it looked like things were never going to come together!

Why is this edition of Dexter’s Half Dozen so important to us?

Not long after we began publishing Dexter’s Half Dozen we sat down for a chat with David and Jamie and discussed some of the strengths and weaknesses of the comic. We love the storyline – it’s exceedingly well written and the team behind it have tried to keep it as historically accurate as possible (while accounting for demons, liches, zombies etc!) right down to the reference material of tanks and weapons used. Where it fell down in the first few issues though was David’s lack of practice with the medium so far. By the time they reached issue #5 David had settled into a style that suited the story perfectly… but the first few issues lacked… something.

They agreed. And they wanted to improve the comic so David went (literally) back to the drawing board to add shading and texture to every page, bringing the first three issues up to the same fantastic standard as the later issues. In some cases he redrew the art from scratch to make use of his greater experience of sequential storytelling at that point. This would all be great… and if things had gone to plan we’d have released this collected edition in 2014 or 2015. As you have already read though, things didn’t go to plan.

We don’t know when it happened, and we’ll never know why it happened but at some point all of the revamped artwork files became corrupted. This was discovered after David and Jamie blew up their computer and they tried reverting to backups. Every page was affected and it seemed for a long time like the idea of releasing a deluxe edition of Dexter’s Half Dozen: The Stone Child was dead in the water.

That was until Danny stepped in. We had just launched Dolphin Squad II: A Death in the Pod, Danny’s second graphic novel, and David had a bonus story in there. When the two of them were discussing their respective works, Danny offered to take a look at the files to see if there was anything he could do to repair them. And there was! 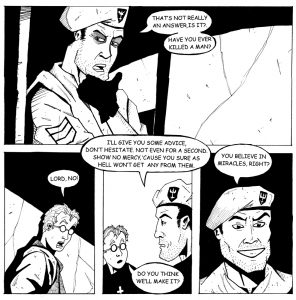 The image above shows original black and white artwork from issue #1. At the time the Dexter’s team had limited experience creating comics using computers so the lettering was done the old fashioned way. The script was printed, cut out and glued to the original artwork pages. This lead to some of the lettering looking a little rough in places and hard to make any changes if mistakes were noticed in the future. 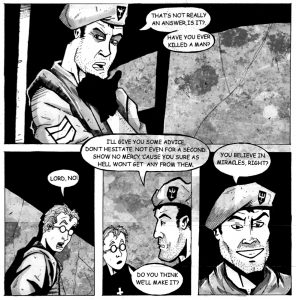 By issue #5 of the original Dexter’s Half Dozen run it was decided that the artwork in future issues should be fully rendered in greyscale rather than the black and white line work seen in the first four issues. Artist, David Clifford went back to the original inked pages and, using a combination of traditional media and computer, fully rendered the first 4 issues and even redid a few pages from scratch. The characters and foreground elements were painted by hand with background textures and shading done on computer. The process took many months but, just has the project was nearing completion, David’s computer crashed and all the work was lost!

The files were eventually recovered from a back up but unfortunately they were corrupted. Lines appeared across much of the artwork and background textures were missing so much data they appeared entirely wrong if they loaded at all. The plans for the collected editions were put on hold. 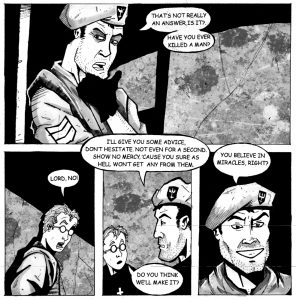 As I was already looking at the original 2008 files with a view to re-lettering them I asked David for access to the 2014 files to see if there was anything I could do. I was expecting to have to completely recreate David’s work by greyscale rendering each page from scratch – but after some experimenting I found that by saving the images as a PDF document before opening them in Photoshop the corrupted backgrounds could be fixed. The lines still remained but they could be repaired with a relatively simple but time consuming process. The image above is the result of that process. 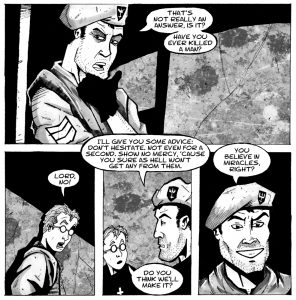 Whilst repairing the corrupted artwork I also finished the background rendering on several pages that weren’t completed at the time the files were backed up. I was able to put my knowledge and experience to good use with several techniques to duplicate the same style and make my pages look as close as possible to David’s. Along with the artwork I re-lettered the entire collected edition using an updated script from writer, Jaime Lambert.

Now that you know the trouble we’ve gone to in getting Dexter’s Half Dozen: The Stone Child ready for release in its deluxe collected edition, it’s time for the cover reveal. 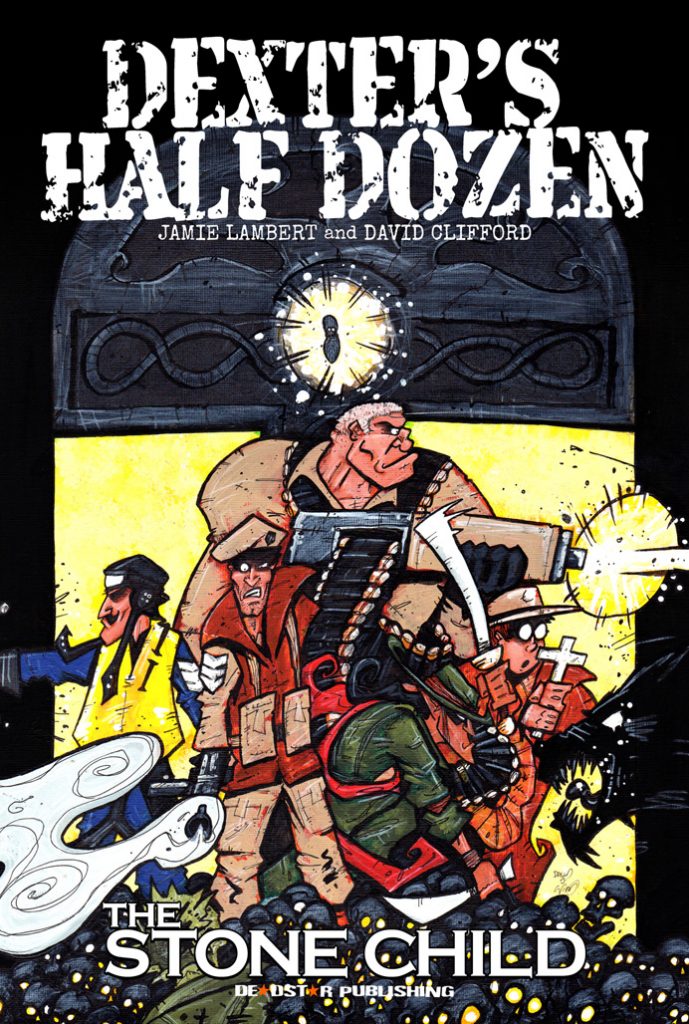 And here’s the reverse: 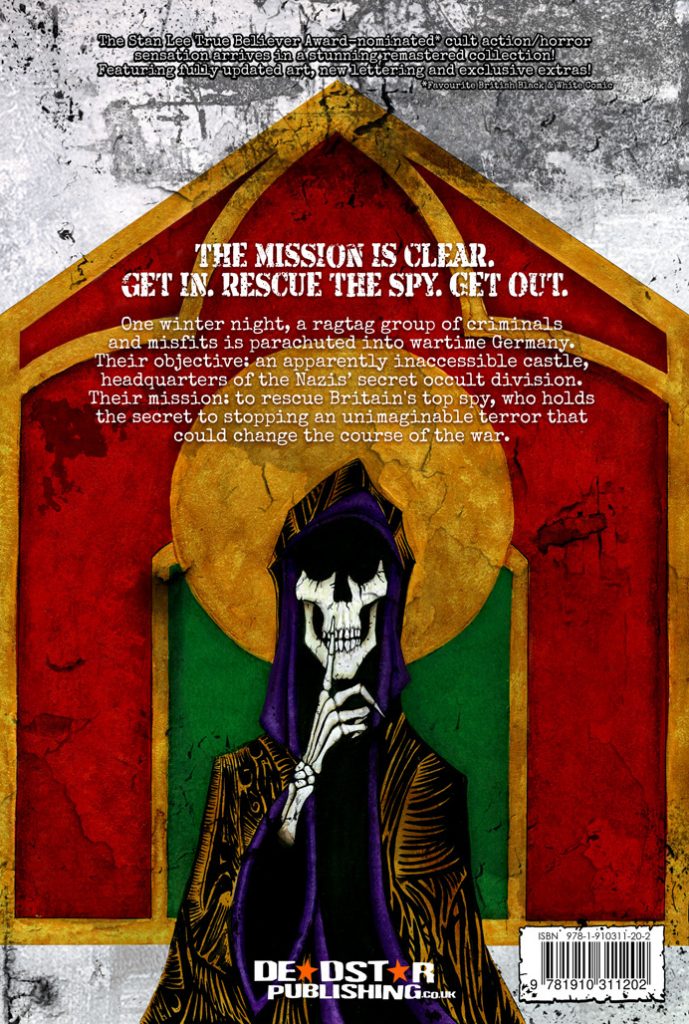 As well as the complete story of The Stone Child, this edition also contains original sketches and concept art, the first ashcan used to promote the series, a pin up by Alex Ronald and will feature a foreword by Barry Nugent, Editor-in-Chief at Geek Syndicate. In total, Dexter’s Half Dozen: The Stone Child is 100 pages long and will be released at the True Believer’s Comic Festival in Cheltenham on February 2nd 2019. You can pre-order it now by visiting our store or by asking your local comic store to order it for you.

Working from a small team can be tough at times – critical tasks with impending deadlines get prioritised over everything else… and once in a while you get a break where you sit down and realise, “That thing I meant to do… I meant to do it three years ago.”

We had one of those moments recently in regards to this website. Our website has grown over time, with bits being added as we had time to work on them but it’s never really felt ‘complete’. Looking at the internal files, we’re on version 0.18 of the website since we swapped over from the Wix hosted flash site in 2011 and most of the updates since 2013 have been bugfixes. The site hasn’t really had a proper overhaul in a very long time. As a result, bits have been tinkered with but never fully implemented… and other bits have been broken along the way (like the theme for the blog and shop) – not to mention, some of the information is now long out of date.

While we could recode the site from scratch using skills from within the team that’s not really the best use of our time and resources right now… and it doesn’t play to our strengths either. Instead, we’ve asked a third party to take a look for us and preliminary design work has already started. Some of the improvements we expect to see include reduced page load times, easier ways to update information on different pages (and even the ability to easily add new pages!), as well as a complete overhaul of site content bringing everything up to date and ensuring consistency throughout.

We’re quite excited by all this as it means we’ll be able to give you more access to better information in a clearer fashion and will open the way for us to expand our web presence – this is where your feedback comes in; if there’s something you’d like to see on our site, now’s the time to email us and let us know.

It may not look like much – just the addition of a scrolling icon bar to the left of the screen, but last night we rolled out probably the biggest site update since September 2011! Behind the scenes a significant portion of the web gobbledegook that makes everything work has been rewritten. There’s still a lot that could be done to further improve the code this site runs on, but now for the first time ever we can make sweeping updates with just a few keystrokes. Gone are the days of having to update every page separately!

Of course, a few gremlins have crept in along the way. We’re aware of them and they shouldn’t affect your experience browsing the site. We’ll be squashing them over the coming weeks.

That’s all from us for now – we’d better get back to finishing touches before tomorrow’s expo!

Hi all, it’s been a while since we’ve posted a blog. If you subscribe to our newsletter then you may already know some of the reasons behind this. If not, I’m planning on writing a bit more about next week.

In the meantime though: site upgrades!

There are a number of things that we wanted to change or improve with the site since we last spoke about improvements. Not least of these were a number of bugs and gremlins in the store. We believe all the issues with the store have now been resolved (and you are very welcome to test that statement with a purchase!) so the next thing to do is finish off ironing out a few niggles on the main site.

Pretty much all the code is now in place but we ran out of time yesterday and couldn’t test for bugs. As a result we decided not to deploy the newest version of the site. That will now appear on Sunday 19th August.

We think you will like the upgrades – and they make it easier for us to update things too, so soon we’ll be expanding both our resources and our freebies sections. The shop is also now capable of supplying ebooks so we’ll be debuting those soon.

That’s it for now, enjoy the day (and the new and improved store)!