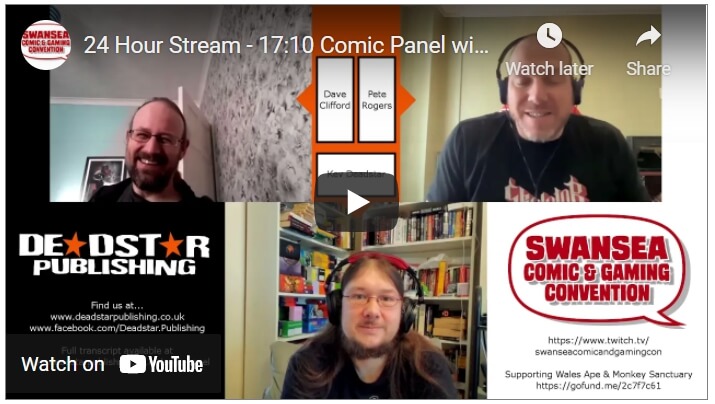 In the past few weeks we’ve had the pleasure of working with the Swansea Comics and Gaming Convention on a few different things.

Back in March, our editor (Kevin) was interviewed by Adam and Ricky as part of their ongoing spotlight series on small press creators. You can see what we ended up discussing (with topics ranging from how we got started through to who would win in a fight between Sonic and Mario) here.

A few weeks later, the duo ran a 24 hour live stream to celebrate the Swansea Comic and Gaming Convention 2021 with assistance from a variety of co-hosts, and we had the opportunity to collaborate again when they asked if we could conduct a creator panel for them. Since Kevin had encountered a few technical issues during the interview, we opted to record the panel a few days before and we sourced questions from various fans.

Pete Rogers (the writer for 7 Shades) was joined by Dave Clifford (artist on both 7 Shades and Dexter’s Half Dozen) and we had our first real chance to catch up since November 2019! The video is below and there’s a full transcript here.

It was probably a good idea that we pre-recorded it because on the day disaster struck and the file didn’t transfer correctly to the location Adam and Ricky were streaming from. Fortunately, we’re based in Cardiff so a quick dash down the M4 with a portable hard drive solved the problem – and Kevin had a chance to watch the livestream in person for a bit.

You might notice there’s a link in the bottom right of the video for the panel – that’s because as part of their 24 hour livestream, the Swansea Comic and Gaming Convention were raising money for the Wales Ape & Monkey Sanctuary. The fundraiser is still active and your support there will help keep a non-breeding, non-capturing ethical sanctuary open.