Sammael Jehosephat Hicks is the (Dead)star of the show today. It’s Deadstar Publishing’s 11th birthday and we’re celebrating with a return to the cursed town of 7 Shades.

It’s looking like we’ve turned the corner now and we’re starting to come out the other side. We’ve been discussing signing events at comic stores, and in a few more weeks we should be attending our first comic con in over a year. That, coupled with it being our birthday, made us think that the time is right to peel back the curtains and give you a peek at the mysteries beyond. 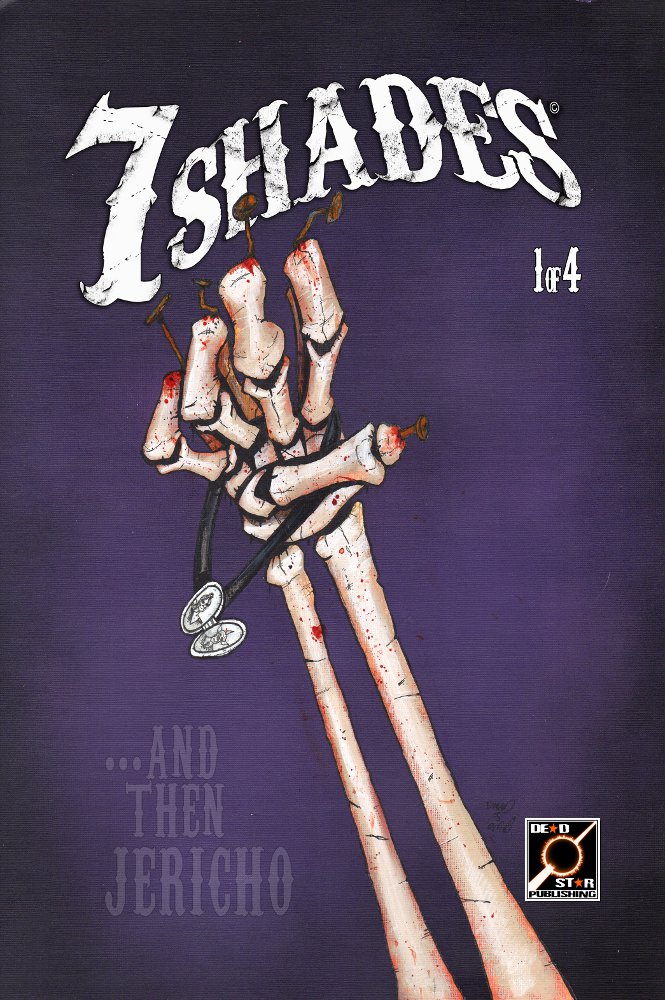 “And then Jericho” is the first book in the next 7 Shades arc and you can get it today! Yes, that’s right. It’s our birthday so we’re giving you a present! We’ll be releasing the book in physical form at the London Film and Comic Con on July 24th-25th but you don’t have to wait that long for it. The ebook is on our store today!

If you haven’t read the first arc and Hell’s Belles, the first oneshot, then you should pick those up now.

Got them? Good! “And then Jericho” follows on after the events of Hell’s Belles (the last thing we released before the world paused) with Samm Hicks now squarely in post as sheriff of the wretched town of Seven Shades. Meanwhile Cousin Uriel, the Hicks brothers’ slippery snake-oil selling shyster of a relative, has arrived to help enact Mayor Azrael Hicks’ plans to ensnare the unwitting townfolk and turn them to his bidding. All the while, Samm’s sister Elsie-beth is getting sicker. And Samm? Well, he’s got other things on his mind. Can he save the town? You’ll have to buy the books to find out!

The ebook is available today – and you can preorder the physical copy which we’ll post from Monday July 26th.